All Entrants are emailed a RideWithGPS url of the route before the ride.

The stage to the first food stop is basically to experience a physical geography lesson about Wenlock Edge, that fine escarpment running 19 miles SW to NE from Craven Arms to Much Wenlock. You’ll discover that Wenlock Edge is actually double-edged, with a big dip in the middle. After leaving Ludlow on A & B roads, you climb the Edge alongside a “bache” (steep stream valley, sort of) on a well-surfaced lane – but don’t get complacent!

You then meander in the very pleasant middle dip of the Edge, perhaps working out how this limestone reef was laid under a shallow southern hemisphere sea 425 million years ago. You pass through Middlehope, Westhope (note the College), under Flanders Folly (once owned by Julie Christie) and through Lower Dinchope before climbing over the Edge’s western edge and descending to Halford. Here you join National Cycle Route 44 to cross the River Onny and the A49 via a short bridleway section. You then climb up and up and up before stopping at Edgton. If you are still alive at the top of the hill, it’s worth looking over your right shoulder for a great view of the Stretton Hills, before the dangerously steep, gravelly and pothole-ridden descent down Basford Bank as you near the stop.

Refreshed as you descend, still on Route 44, that feelgood spirit soon dissipates on the long climb over Oakley Mynd. The justification for including this hill is the fine panorama from along the ridge. If the weather’s miserable and you can’t see anything, then basically it’s a pointless climb. After a short descent and flat section you climb out of Bishop’s Castle to the Kerry Ridgeway, where you are again rewarded with a fine panorama. At Bishops Moat was the original castle before it was decided Bishops Castle was a more hospitable site. You now have some very fine riding down into and along the valley of the River Unk, just short of being the funkiest river in the world. However, steep climbs and poor surfaces return when you turn west to cross the Unk and head over and down to Whitcott Keysett in the Clun valley, and onto the halfway lunch stop at Newcastle.

After lunch is the long but well-surfaced and never too steep climb alongside the petering out River Clun up to the Anchor Inn, which is reportedly not as closed down as it looks. You should really be in Wales now, judging by your western location, the landscape and place names, but for some reason this finger into Wales is English. Just a bit more climbing before you reach the highest point of the day’s ride and then the glorious ridge ride betwixt the Clun and Teme valleys towards Clun. You pass the elusive, and English, Bettws-y-Crwyn. It’s mostly downhill but by now, but the few ups will probably feel like mountains to your legs. Past Clun Church is the final refreshment stop.

Crossing the River Clun by the ford or the footbridge, you have a long, relatively well-surfaced and mainly descending stretch down the Clun valley to Aston-on-Clun and over onto Craven Arms. After a gentle climb out of Craven Arms, there is a rougher climb and descent, back on Route 44, by the back of Norton hill-fort to Onibury. There is now no more climbing of note on your return route, looking over the River Onny, to Ludlow Rugby Club. 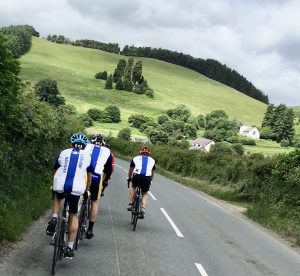